The Dolomites are made of Dolomite right? Any idiot knows that – the clues in the name. Only it’s not necessarily – Marmolada the highest mountain hereabouts is Calcarious Limestone, a cousin of Dolomite, but a fundamentally different beast. There’s agglomerate like that seen on Via Ferrata delle Trincee. But what many don’t know is that there is a whole region in the south west of the range which is entirely Porphyry and Granite – two igneous rocks which are utterly different to the surrounding areas.

Two summers ago whilst driving over Passo Rolle my eyes almost fell out of my head. Not at the stunningly impressive Pale di San Martino (which at the time was shrouded in a cloak of mist) but at the crag on the other side of the road. Unable to stop I resolved to return the following day which we did and together we roamed through the  Scottish Highland-esque landscape. With stunning views over the valley we enjoyed the stark differences in vegetation and the way in which the topology leant itself to small ponds and lakes in contrast to the often bleak arid Dolomite altiplanes we were used to. Of course I wanted to find out more – surely the cliff I’d seen must have rock climbing on it? Indeed we passed a fantastic looking mountain called Colbricon which looked equally stunning.

Recently returning to the mountains after a month in the UK, I found myself climbing with my good friend Mike Stoger, trying to showcase some of the best crags that surround the house. On the last day, wondering what to do to provide some adventure and finding myself in a bookshop, I came across a copy of the 2011 edition of “Lagorai, Cima d’Asti” by Versante Sud. For anyone familiar with these guidebooks, it is of the normal excellent standard and covers the Lagorai region, of which Passo Rolle is the North-Easternmost corner. I purchased it for 25.50 Euro and off we set.

One of the most attractive things about going to the Lagorai from Alleghe is the stunning drive. First Falcade, an attractive traditional village with old Feniles which soon give way to thick forests and then Passo Valles. Here the landscape changes – a river bubbles down by the side of the road and the woods open out a little. The mountains become a little more rolling and the bare earth of landslips becomes a rich dark brown. Climbing to Passo Rolle the road winds out of the woods across alpine pastures with little sign of anything vertiginous – then you crest the pass and that all changes. First the huge steep walls of the Pale come into view, pale and unforgiving and then seconds later the object of our desires Tognazza, a broad 250m high cliff of Porphyry. The Pale dwarfs this cliff but what is striking about it is it’s obvious quality when compared with what you would find only 1km across the valley.

Parking at the ruined Malga Fosse 1km below the pass, the walk-in is a brief although brutal affair. It starts easily enough with a walk down through a meadow until you have to go back up the otherside, up a steep boulderfield. Still, 15-20 minutes will see you at the base of the cliff. Clearly not as steep as the limestone cliffs or the rest of the Dolomites, Tognazza is delightfully faceted, with cracks, slabs ribs and aretes and deep, perfectly formed diedres.

We picked our way to our chosen route Flower Power, a 7 pitch 6b, one of 9 recorded routes on the cliff. The start is well marked – a small stainless steel plaque has been screwed to the rock. Although the topo says small to medium friends are required, in the 5 pitches we climbed, we never needed to place any – the route is well bolted with high quality stainless expansion bolts. I could not vouch for any of the other routes, but this certainly sets a precedent. The pitches are long and varied and the climbing quite sustained.

I set off up the first pitch which starts steadily and builds to a steep, balancy couple of 6a moves through an overlap and steep narrow slab above. With your gear below your feet, just take a deep breath and make the move. Up and right across some grass, a few more moderate moves bring you to a belay.

The second pitch is spectacular, first weaving through a short dihedral and then following a blunt rib and crack with some extremely fine positions and fantastic climbing. Hidden from the belay it’s airy, delicate, powerful, and just plain fun in equal measures.

The subsequent pitch is again totally different, climbing a thin slab (not correctly marked on the topo, but 6a according to another I’ve found). It’s delicate  to start with and then, whilst pulling further right it becomes very well exposed as it reaches a tall arete for the second half. The last few moves before the belay are exquisite as you balance your way up, shifting your weight to take advantage of the small dishes and edges.

A quick 5b pitch leads to a soaring crack line graded 6b. To my mind this was not really very hard, certainly not 6b if you’ve climbed a crack or two in your life – maybe if you’re crimping your way around the main event it is? Certainly there was chalf on the small edges either side of the crack when we did it. However that aside, what a phenomenal pitch – if it were gear protected it would be a fantastic HVS/E1 pitch with bomber gear all the way, but as a bolted outing its just plain fun.

And alas that is where the daily rain stopped play – we scampered back down the abseil piste, getting hit by heavy rain as we got to the penultimate station. Down we went, and off to Malga Rolle for a well earned Weiss beer. I can’t wait to go back – the routes on Colbricon look utterly fantastic! 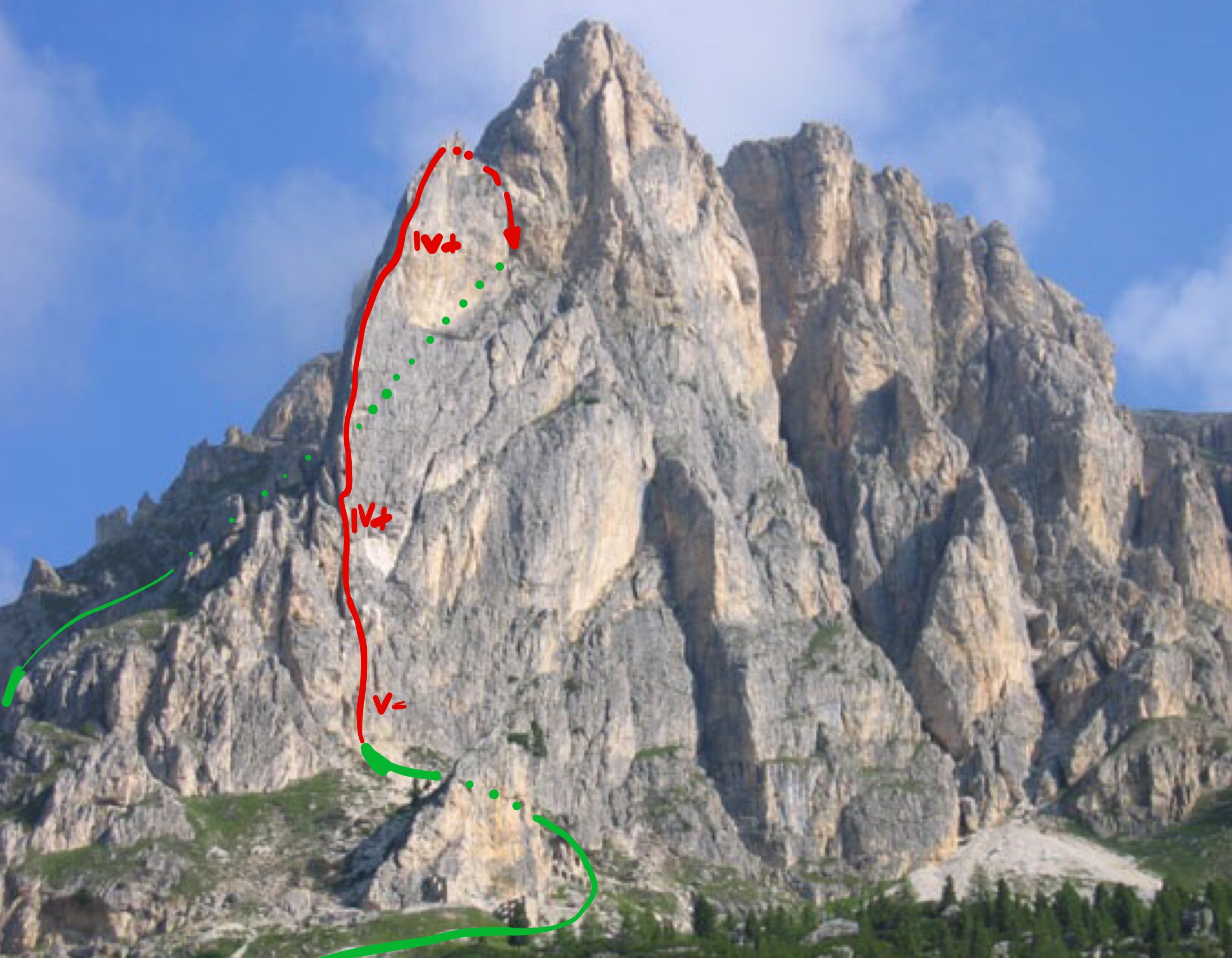 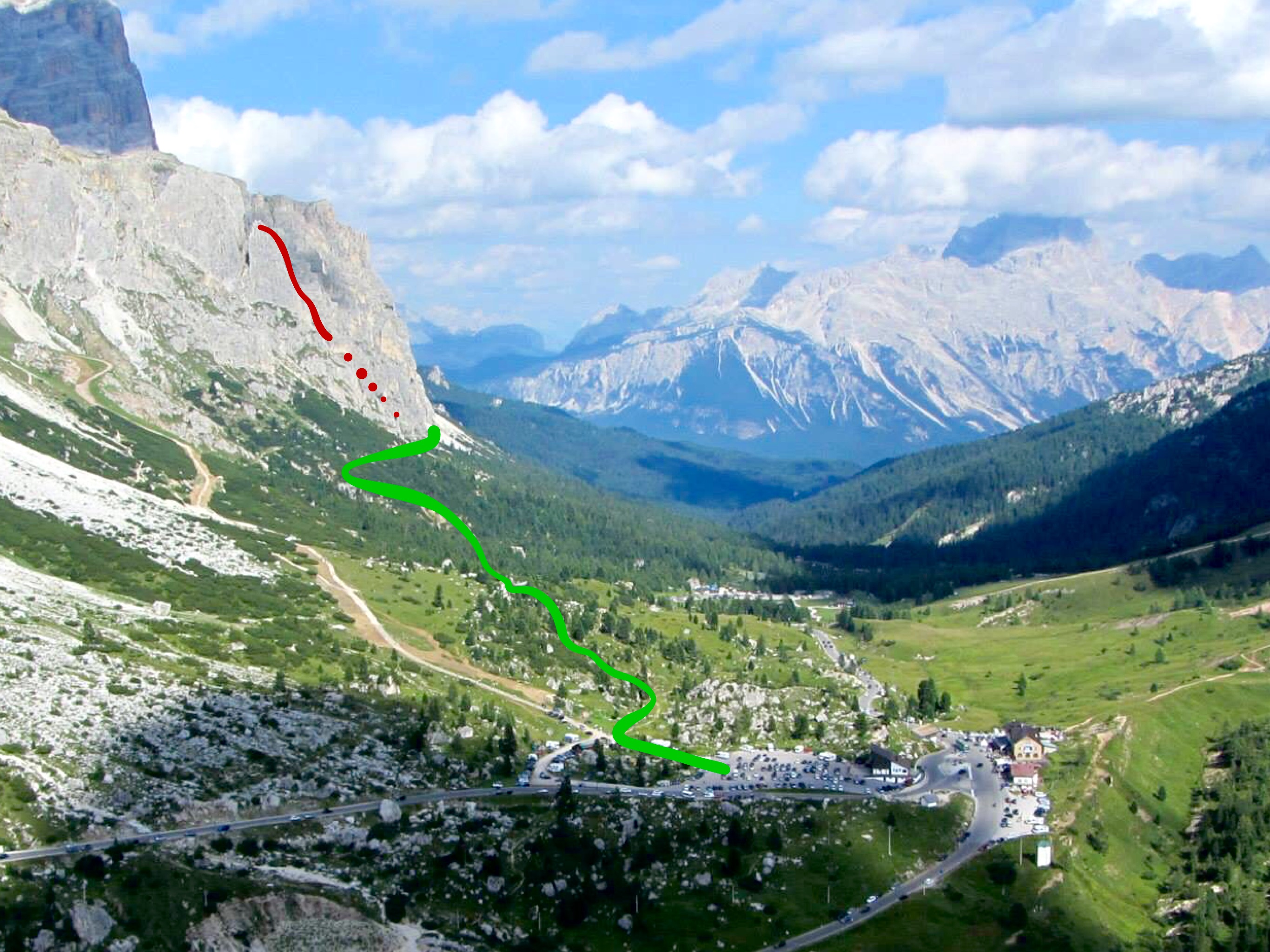